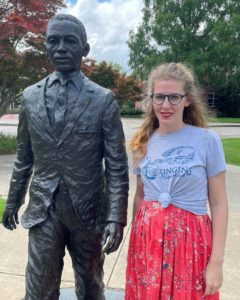 Hometown: Van Buren, AR
Transfer student from the University of Arkansas
BA in Classics with an emphasis in Latin, minor in History (2015)

When and why did you choose to study classics?
I originally was a history major, wanting to focus on early and medieval Christianity. Therefore, I chose Latin as my language. It was not long before I picked up Classical Studies as a second major, then eventually dropped the history major and made Classics my only major.

What were some significant accomplishments or favorite memories while at UM?
I transferred to UM during my sophomore/junior year. I was coming in at a time when I was really struggling with Latin. I was able to work with Dr. Pasco-Pranger to become much better at Latin to the point where she asked me to be one of the Latin and Greek tutors my last few semesters. That put me on the path to my current career! As far as memories, I have too many to name, but I was able to build friendships with my classmates and professors that have continued to today. Many of my UM friends have become extended family members that we share major life events with and visit regularly.

Please describe your career path since graduation from UM.
After leaving UM and after tutoring Latin for a year, I knew I wanted to teach Latin as a career and worked toward that goal. I have now been teaching 7th-12th grade Latin at Founders Classical Academy in Rogers, Arkansas for 4 years. I love that I get to do something I am so passionate about every day and that I get to help to foster that same passion in my students!

What is the value of studying Classics (and Latin) in today’s world?
As I tell my own students regularly, there is so much value from studying the past, so many great works from the classical period that have morals and examples that are still applicable to today’s society. As far as studying the Latin and/or Greek languages, they both open up a pathway for the acquisition of so many other languages. Studying these ancient languages expand your English vocabulary, both for technical terms in various career fields, but also in your everyday speech and writing. Beyond that, the relationships you will foster as a member of the Classics Department are ones that will continue to enrich your life forever!