Class Explores ‘Who Owns The Past? 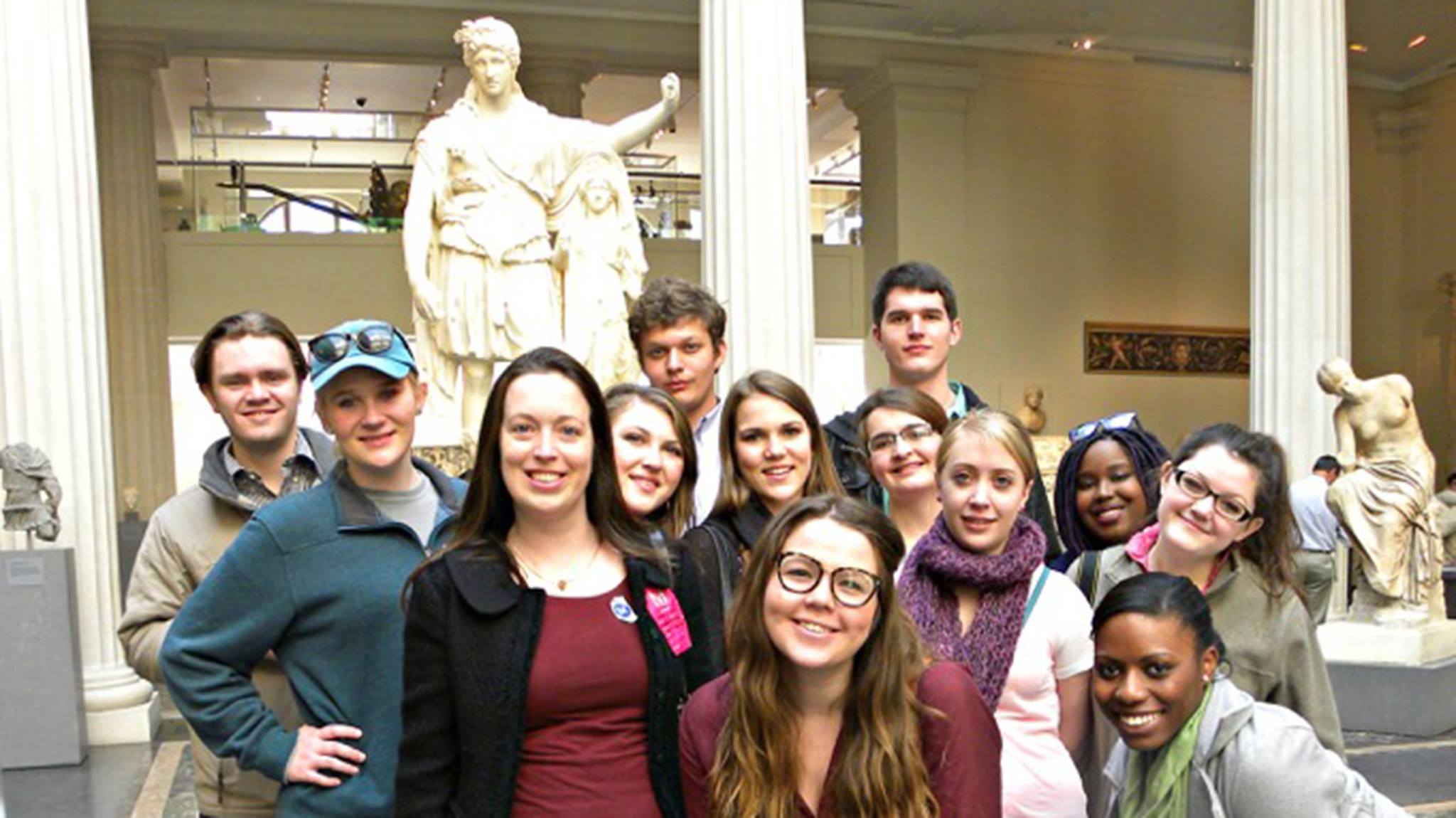 A University of Mississippi class focusing on “Who Owns the Past?: Ethics in Archaeology” recently traveled to New York to learn about the financial, legal and political considerations in the ongoing international battle to properly preserve ancient artifacts.

Hilary Becker, assistant professor of classics, teaches the 300-level class made up of Sally McDonnell Barksdale Honors College students. Over spring break, the class visited the Metropolitan Museum of Art, Fordham Museum of Greek, Etruscan and Roman Art, and Christie’s Department of Ancient Art and Antiquities, among other educational attractions in New York.

“This is an opportunity to look at ethical dilemmas, using current events and case studies involving antiquities and ancient sites,” Becker said. “There are cases like the famous Elgin Marbles that once graced the Parthenon, but they’re in London now. The fact that they’re in London means millions of people can see them each year, but the Greeks think they should be in Athens because they would attract people there, and the marbles are also part of their heritage.”

The Honors College provided funding for the course and the trip. It funded another class this semester, a cinema studies course on New York City in film, which also traveled there during spring break.

The archaeology class’ visit to New York gave students an opportunity to see antiquities and also to explore questions of who can or should “own” these objects and care for them. The sessions in New York, as well as the ongoing class discussions, expose students to the wide range of legal and ethical issues over ownership of cultural heritage.

Preservation issues have recently made global headlines. The terrorist group known as the Islamic State of Iraq and Syria, or ISIS, is looting artifacts and selling them on the antiquities market and also destroying cultural sites in the process. The money they make from the looting of historically important pieces helps to fund their terrorist operations.

ISIS is only one group responsible for plundering historical sites. Scholars, curators, archaeologists and others are battling this problem by trying to ensure artifacts are scientifically excavated with care to preserve information about the dates and locations in which those pieces were found. This information is often lost when artifacts are illegally and haphazardly removed.

“You can buy a cuneiform tablet through eBay, but it could be that it was looted by ISIS and, very indirectly, you could be funding ISIS,” Becker said. “Everyone agrees we don’t want to fund ISIS. That’s the worst case, but at the very least, if you have an undocumented object without a pedigree, far too often, it was probably looted from some site and it’s now devoid of context. … If you have that object out of context, you lose most of the information about it.”

The class also met with Nancy Wilkie, a professor emerita at Carleton College who serves on the Cultural Property Advisory Committee for the U.S. State Department. The committee advises the president and the State Department about cultural heritage and protects sites and archaeological objects around the world that are at risk of being looted.

Wilkie also gave a public lecture March 25 in Bryant Hall. She discussed looting and efforts to return those objects to their native countries.

The two classes were the fruit of proposals the professors submitted to the Honors College. The first was in 2013 and focused on the 2014 World Cup.

The experiential classes are an excellent opportunity for students, said John Samonds, associate dean of the Honors College. The college’s officials hope to continue funding special topics courses each semester.

“We want them to engage with the world, not just spectate,” Samonds said. “We try to develop these experiential courses that allow students to grapple with issues, particularly with the classics course. There weren’t just issues of archaeologists taking things from Greece or taking things from Peru 150 years ago and displaying them in other museums. This is going on right now.”

Samantha Lund, a senior from Biloxi majoring in international studies and French, said the class has helped her understand the increasing focus on where artifacts came from, in addition to their actual financial value.

“There are countless unforeseen consequences to the discovery, distribution and legitimization of artifacts that influence a number of aspects of a nation’s identity and reputation,” Lund said. “Both public and private institutions will go to extreme lengths in order to prove legitimate provenance for a particular artifact and also to mediate conflicting claims of property rights.”

Jessie Smith, a sophomore liberal studies major from Jackson, called the trip “unforgettable,” particularly the opportunity to visit Christie’s auction house warehouse. There, the class met with experts from the antiquities department and carefully walked around golden tea sets and other artifacts.

“I’m still in shock that we got to very carefully pass around a small, scarab-shaped piece of carnelian with a soldier carved in intaglio on the other side (circa 500 B.C.),” Smith said. “This experience of holding such amazing and ancient objects in our hands was something that many other trips could never provide. I’m eternally grateful for this opportunity.”