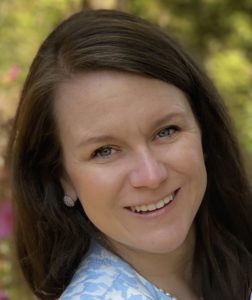 The Department of Classics is proud to announce that Assistant Professor Jacqueline DiBiasie-Sammons has been chosen by the College of Liberal Arts as the 2021 recipient of the Dr. Mike L. Edmonds New Scholar Award in Humanities. This award recognizes faculty who are within six years of their first tenure-track appointment and have demonstrated exemplary performance in research, scholarship, and/or creative achievement; recipients have significantly enhanced the scholarly reputation of the College and University through exceptional contributions to their disciplines and demonstrated a positive impact on the success of their department. 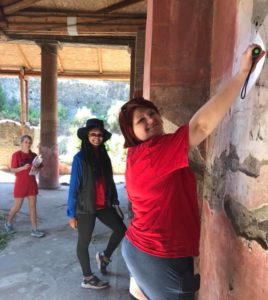 Summer 2018 students at work in a Roman house in Herculaneum.

Dr. DiBiasie-Sammons has just completed her fourth year as an assistant professor, and has quickly become a research leader in the Department of Classics, working in the exciting area of ancient graffiti. She is the field director and technology supervisor of the Ancient Graffiti Project (AGP), which has undertaken to document and digitize all of the ancient graffiti from Pompeii and Herculaneum, and to produce new critical editions of the graffiti in a publicly accessible online database (ancientgraffiti.org). Graffiti, produced as they were by people of all social classes, genders, occupation, and ages, have enormous potential to open new windows into Roman culture. Dr. DiBiasie-Sammons and her colleagues are building a robust and user-friendly online database, that allows open access to these “windows” to scholars all over the world. To date seven UM undergraduates have participated in the AGP’s fieldwork.

The graffiti-centered fieldwork is also the starting point for much of Dr. DiBiasie-Sammons’ more traditional article-based scholarship: among her eight published journal articles and book chapters are cultural analyses based on the distribution and typology of inscriptions, methodological articles, and revisions and reinterpretations of known inscriptions based both on new technological approaches and on archival work. Her most recent work focuses on the particular category of charcoal graffiti, scribblings in a material so delicate that they are quickly destroyed when exposed to the elements. For this project, Dr. DiBiasie-Sammons has received research support for archival work from the Getty Research Institute to access the field notebooks of the original excavators in the Getty’s collections.

In October 2019, Dr. DiBiasie-Sammons and Dr. Holly Sypniewski of Millsaps College co-chaired the Symposium Campanum at the Villa Vergiliana in Cuma, Italy, hosting a slate of more than twenty scholars from ten countries, presenting research on inscriptions of the Bay of Naples region. The symposium was a grand success, and Dr. DiBiasie-Sammons leadership of the group clearly signals the strong position she is mapping out in the world of ancient epigraphy.

Though still only six years out from her 2015 University of Texas-Austin PhD, Dr. DiBiasie-Sammons is making her scholarly mark on a variety of fronts, and on a truly international stage. Her accomplishments are already impressive, and she has a strong, innovative, and multi-faceted research program that promises to flourish for many years to come. Congratulations to Dr. DiBiasie-Sammons!