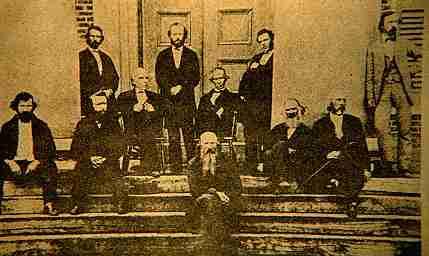 Chancellor Waddel, Professor Wheat and other faculty on the steps of the Lyceum in the late 1860s

Classics has been part of the curriculum of the University of Mississippi since its inception. One of the first four faculty members was John Newton Waddel who had the title Professor of Ancient Languages. In 1856, Greek and Latin were made distinct “schools” and, in the early 20th century, separate “departments”. In 1937, after the death of Professor Alexander Bondurant, the Departments of Greek and Latin were merged into the Department of Classics.

In the early 19th century, knowledge of Greek and Latin was a prerequisite for admission to colleges and universities, so it is not surprising that Classics played a prominent role in the early history of the University. For instance, the first Chancellor, George Frederick Holmes, had previously been Professor of Ancient Languages at Richmond College. The first building constructed on campus was named the Lyceum in honor of the school of Aristotle in Athens. In 1865, when the University reopened after the Civil War, three-quarters of the University’s faculty were Classics professors! John Newton Waddel was himself Chancellor of the University from 1865-1874. Four other classics faculty members were briefly acting Chancellor in 1874, 1921, 1930 and 1932 (Professors Wheat, Bondurant, Longest and Milden).

From the beginning to “The War”
After the Civil War
The Bondurant years
Mid-20th century
Late-20th century and beyond . . .