Tharangi – a classics and English double major – is a whirlwind on UM campus, and is involved with many groups, including Rebel Writers, Hip Hop Rebels, the National Society of Collegiate Scholars, Girl Up, the UM Soccer Club, among others. Her creativity and energy inspire students and professors alike.

Why did you decide to major in classics?
About halfway through my freshman year, I decided to study Classics because I was taking Latin and Classical Mythology, two classes that really piqued my interest in classical literature. Then, the professor I had for both courses asked me if I was thinking about becoming a Classics major. As I thought more about it, I realized just how much interest I had in that major. So, I decided to pick it up as a double. I’m going to go to graduate school for an MFA in creative writing. I want to use my Classics degree to influence my style of writing as well as the content.

Have you had a particularly memorable experience with a professor or mentor?
Every day, I’m surrounded by professors who push me to be my best and to guide me. The atmosphere is the Classics department is nothing short of amazing. I’ve been aided with financial and academic help by my department, and I feel at home here.

What are your career plans?
I’d like to teach at a college or university and write.

Activities outside the classroom?
During the last spring break, I studied in England and Scotland with a UM Professor. The trip was part of a semester-long course on fantasy fiction. We visited the castle that was Hogwarts in the Harry Potter films. This upcoming semester, I will do another spring break trip—this time to Greece! The class I’ll be taking is cross-listed in both the Classics Department and the Department of Writing and Rhetoric. It’s called “Performing Democracy in Ancient Athens.” 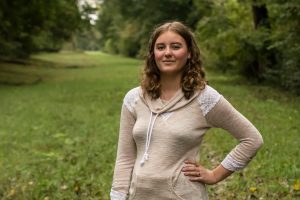 Annabelle – a classics and English double major – is a writer of young-adult fiction, a motivational speaker, and a journalist. Her novel, Ode to Rebellion, was on the state bestsellers list of her native Oklahoma. She has given inspirational talks at high schools about the craft of writing and the importance of “following your dreams.” On campus she writes for the Daily Mississippian, the award-winning student newspaper and is vice president of Cover-to-Cover.

Why did you decide to study classics?
When I was in high school I started taking Latin. I had an amazing teacher who taught not only Latin but also Greek and Roman history, mythology, and culture. It was in that class that I discovered my love of Classics. I knew I wanted to major in something that I would enjoy so Classics was an obvious choice.

Why should someone decide to study classics at the University of Mississippi?
Classics has something for just about everyone. If you are interested in languages, we have two! We have a rich and interesting history. If you like literature, we have lots, both in translation and in the original language. If you are into theater, we have Greek drama. Plus we have art and archaeology. I think everyone can find something they are interested in within Classics!

What is an especially memorable trip, research, internship, or other school-related activity you’ve done?
My first year at Ole Miss I was invited to go on the fall Destination Unknown sponsored by Student Housing. I got up at 4am and got on a bus having no idea where I was going to end up that day! The trip was to Nashville and I took the chance to see the Nashville Parthenon, which I had never seen before. I will never forget walking into the cella and seeing the massive statue of Athena. I was speechless!

Career goals?
I am an author, so my goal is to write and publish as many books as I can (with many influenced by Greek and Roman history and mythology). However, one day I would like to start my own publishing company that is focused on publishing the works of young authors.

Have you had an experience at UM that made you feel empowered or gave you a leadership opportunity?
In Spring 2020 I took a Topics in Classical Civilization course. We focused on pivotal moments in Greek and Roman history, however, it was a debate and roleplay style class. Each student was given a character (some historical and some not) and we would argue and debate issues relevant to that time period. For one of our units, I was assigned the role of Thucydides, a Greek historian from the mid 400s B.C. E. As part of my role I was to write my own history that covered the events that transpired in class. I was so excited to be able to combine writing with my passion for Classics, and it really made me feel that I had made the right choice in choosing to study Classics.

Any particular support or encouragement you have received from a professor?
All the professors in the Classics department are super supportive of students. Dr. Ajootian has helped me a lot with research and finding sources, and is always available to meet and help in any way she can.

What do you enjoy doing outside of academic pursuits at UM?
Other than my academic pursuits, I love to write. I also love crafting (scrapbooking and painting). I like to listen to music, binge Netflix, and read!

What is your go-to meal in Oxford?
My go-to meal is cheese quesadillas and a chocolate milkshake or coke float at Cook Out.

What are you binge watching?
The Mandalorian! I have to be ready for the next season!