In sorting through materials shelved in an extra office (our “departmental library”– now to house a member of the University’s ever-growing faculty!), we discovered this week a historical gem! This 1849 Greek-English Lexicon, a forerunner of the Liddell and Scott lexicons widely used today, bears the signature of James Jones Quarles of College Hill, Mississippi. Quarles was the first graduate of the University of Mississippi in 1851, and later a member of the faculty. Further signatures belong to John H. Quarles, who is likely a brother of J. J. Quarles. He is listed in the Historical Catalogue of the University of Mississippi: 1849-1909 as “Not graduating” in 1856. On a later page, Frank Quarles records that this lexicon was left to him by his father, J. J. Quarles. Frank was the grandson of the original owner of the book, and is listed as a “New student” at the University in 1904-05. The Department has donated the Quarles lexicon to the University of Mississippi Libraries’ Archives and Special Collections for preservation. 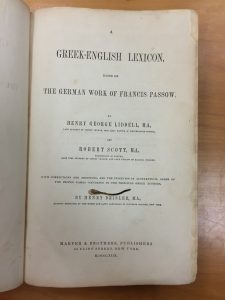 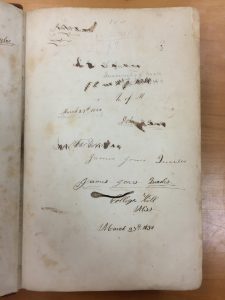 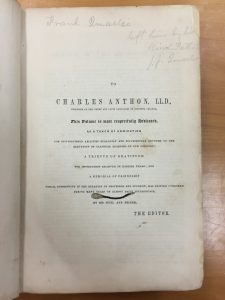